I already blogged about Lucy, here. And I didn’t plan to do it again.

When I heard the Bostics were going out of town for a week, I volunteered to watch her only because I knew I was, next to them, the person most familiar with her care. And besides, I’m uniquely suited to keeping her with me all day because all the people at my job are used to working in a zoo.

Lucy gets a bottle at 6:00, 10:00, 2:00, 6:00 and 10:00. So I picked her up last Saturday and I made sure she was fed at all the right times. The day passed uneventfully and Lucy went to bed in her bag— hanging on a doorknob in my kitchen. I went to bed that night relieved. We had evidently found our groove. No drama. No blog.

I was very pleased.

Sunday morning I work up to what sounded like a noise right outside my bedroom door. I soon dismissed it as my imagination, but seeing as it was 6:00 am and time to feed Lucy, I got up.

As I left the bedroom and headed to the stairs, I noticed something dark on a stair. What had I left on the stairs? Books perhaps?

It was Lucy. She had apparently gotten out of her bag, over the baby gate, out of the kitchen, through my living room, up the stairs, and back down. I knew because she had left a trail of small dark circles in her wake. Given the source, I call them Luberries.

Lucy, I informed her, you are done in my house. You are now strictly an outside pet. 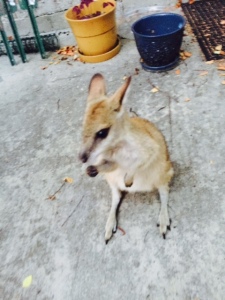 I have a sorry excuse for a backyard—just 14’x14’, but thanks to Charlie, it is barricaded by a 6 foot wood fence. Thanks to Christopher, it is reinforced with a roll of chicken wire. So, it’s basically impenetrable for a wallaby. I was very pleased.

Monday we seemed to find our groove again, and Lucy was quite sweet. She would come hopping up to me and lay her hand on my knee while I gave her a bottle. She enjoyed being scratched and petted and before long, all was forgiven.

That brought us to Tuesday. When I got to the office, I put her outside in a kennel so she could eat grass and enjoy the spring air. I checked on her every so often, but she was fairly safe inside the confines of the box, so I wasn’t too worried.

Until I went to check on her and she was gone.

Seriously. She was gone.

I ran outside—sure I was hallucinating. She was ten feet outside the back door. Had she been stolen?

I discovered that although the front door was still shut and latched, the kennel had a back door. And although the back door had been pushed up against the side of the deck, it was now several inches away and the door was open—just enough for a Houdini of a wallaby to squeeze out into the great unknown.

Fortunately, I found her in the parking lot. But finding her and catching her are two different things. I called for reinforcements and the next thing I knew, Tyson, Katie, and I were trying to extract a runaway kangaroo from the hedge. Same hedge. This feels like Déjà vu. I was not at all pleased.

Somewhere in the night Tuesday night I was awakened by a clap of thunder. I could hear rain beating down on the roof like two fists on the bathroom door. I sprang out of bed. Lucy, my outdoor pet, was going to get soaked.

I ran out to the back yard in my bare feet and there was a bright flash of lighting as if God was taking a picture of me and the little gray animal streaking across the yard. She was making a squealing noise I hadn’t heard before. She was not at all pleased.

The flash was immediately followed by a ferocious clap of thunder. You probably think I’m exaggerating. But there is no exaggerating this. It was raining hard, thundering hard, and lightening hard and I was in my pajamas on my hands and knees under the grill cover trying to coax a scared little animal out of her refuge of grease and gas smells.

It was 3:00 am when I brought her back into my kitchen. I’ve been told that kangaroos like hot water, so I placed her in the kitchen sink thinking I’d get her warmed up, cleaned up, and calmed down all at the same time. I gently reassured her as I spooned warm water onto her back. Meanwhile, she was profusely laying luberries. In my kitchen sink.

Lucy was warm and dry and—in my opinion—ready to go back to bed, but her bag was still thumping around in the dryer. I was ready to go back to bed myself, but there was sort of nothing to do but hold her until her bag finished drying, so I settled my exhausted self into the rocking chair.

Julie Anne, who had been supervising this entire scene, sat near my feet. In the dimness, I could see her white head cocked as if giving me a strange look. Stop it, Julie Anne. I said in my firmest 3:30 am voice. I felt foolish enough sitting there crooning to a kangaroo in my wet pajamas.

Lucy started squirming so I headed back to the kitchen. In case she was getting ready to lay more luberries, I’d rather have them on the tile than in my arms. But Lucy instead headed straight for Julie Anne’s bowl and started eating dog food like a Marine fresh out of boot camp.

It’s 3:30 am! I admonished her. You aren’t supposed to be hungry. Her bag was basically dry and I was ready to put her away.

But Lucy was not interested in her bag. She was interested in dog food. Lucy, you may be from the land down under, but it is 3:30 am here. I do not want my night to end like this.

Should I give her a bottle? Should I let her eat dog food? I didn’t know. I was out of her formula and I had just paid a premium for supplemental kangaroo pellets; both were on a UPS truck somewhere between Minnesota and Charleston and they were not going to do me any good just then.

Fine. Eat the dog food. We’ll deal with it in the morning.

Well, deal with it we did.

In fact, if you’ve followed this blog long at all, you know that I am extremely unlucky with pets and their excrement. Wednesday was not an exception. In fact, my misfortune rose to new heights.

I’m not sure if it was the substitute formula I tried, the dog food, or just generally eating too much, but Lucy made quite a storm of her own. After I re-washed and dried her bag, of course.

Never did one pray so hard for the UPS man.

I’ve finally officially finished the “hand off” of Lucy to her next caregiver. And I’m not saying I miss her exactly. But I am saying that over the course of the week, I did find myself observing her and thinking, isn’t God creative?

I mean, we start to take for granted the beauty of the scenery around us. We take for granted the fun in our dogs, cats, and kids. We look past the simple creativity in aquarium fish, wildflowers, and waves hitting the beach. But God’s handiwork is such a marvelous living proof of His goodness and His power. Sometimes, at least for me, it takes something we don’t see every day—like a small kangaroo hopping around our house to get a fresh perspective of the overwhelming majesty of our God.

I can just picture that first kangaroo hoping out of the first pouch and laying that first luberry. And God saw everything that He had made. And He was very pleased.