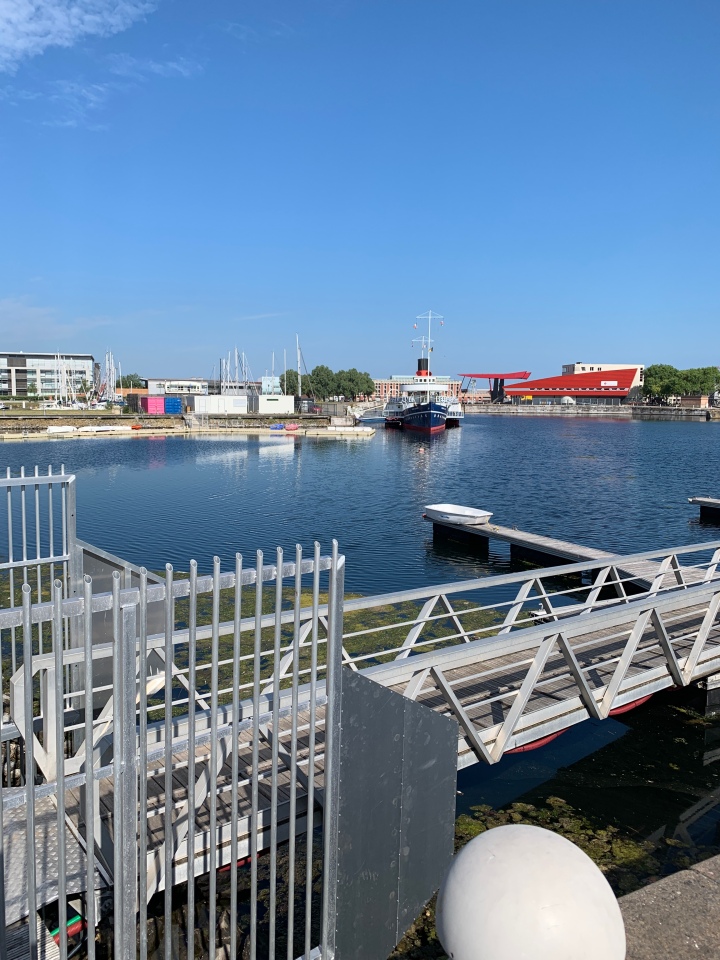 The sun was bright; The air was clean and fresh. I could hear seagulls overhead. We were only in an ugly bus stop, but I had the feeling I was going to like Dunkirk.

I had sensed that Dunkirk, France was not a popular tourist destination. There were no tours, no trains, and not much else between Brussels and Dunkirk, so I had built my day around a public bus schedule which meant a very early start.

It also meant I spent two hours waiting for a bus that morning—5:45 to 7:45. The bus had been an hour late also which meant I arrived in Dunkirk an hour later than planned. Which also meant I would have only two hours before I needed to catch the only bus back.

I checked Siri and the 1940 museum and beach were a 34 minute walk away. Which meant that I was going to have less than an hour to do both.

It wasn’t ideal, but I did enjoy the walk. It felt so different than the craziness of Amsterdam…I wasn’t constantly dodging bicycles whizzing past me and shops selling trinkets and French fries every four feet.

My walk wound around the port and a few signs now and again paid tribute to the events of 1940 and the miracle of the mass exodus that saved 330,000 troops. But for the most part, it was just a simple quiet walk through a small port town going about it’s Friday morning business. The hills were not alive with the Sound of Music, there was no Tour de France, and no 1992 Olympic Games.

It did take all of the 34 minutes Siri said it would, so I was in a rush by the time I got to the museum. This whole trip, I’ve scarcely been to a museum and now I found one I wanted to see and there was not time. :(. It’s not huge, but I could have spent an hour except that I wanted to save enough time to climb up to the beach.

The beach was quiet too. There may have been a dozen other tourists, but that was it.

I wasn’t quite sure whether to feel glad there was no one there to break the stillness of the place or whether, perhaps, this is a bit underdone give the significance of the events that took place here. (I mean, they only had five magnets on a little stand for a gift shop and the only one commemorating WWII was an airplane. I mean, I like airplanes and all, but this is Dunkirk. Just sayin’)

I practically ran back to the bus station only to find that, once again, the bus was crazy late. Didn’t seem quite fair that I had to spend a third of my time sitting at the bus stop; but I decided just to be glad it was a beautiful day and, unlike this morning, there were benches to wait on.

There was not a direct route back to Brussels, but that was okay because I still had one last place I hoped to see in Belgium: the village of Ghent.

If you ever go to Ghent, do yourself a favor and take the tram to the center of the old city. It’s a long walk.

Of course, I walked.

My plan here was to rent a bike and just ride around the back streets instead of doing the typical churches, castle, canal, and belfry. I’ve seen so many great places to ride a bike the last few days but hadn’t ridden at all. 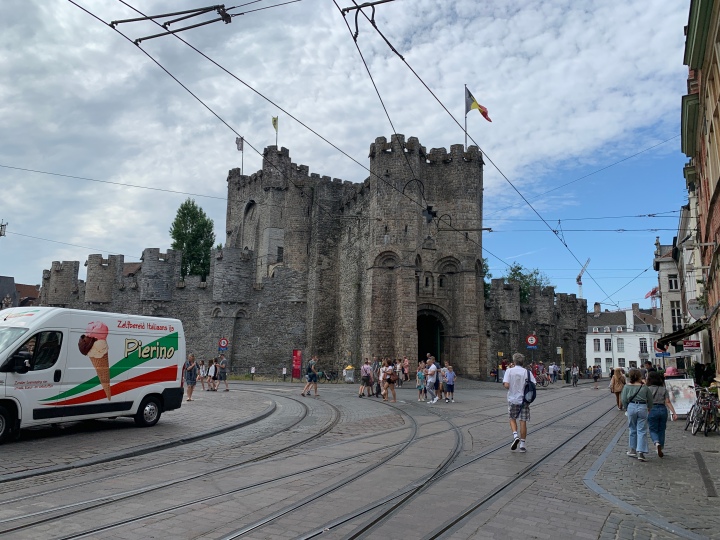 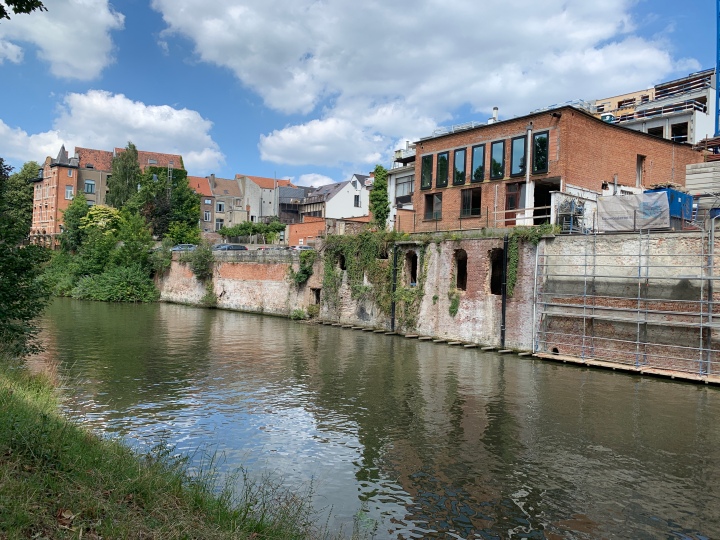 I’m not sure how, but I ended up doing the church, castle, canal, and belfry stairs. I’ll post the pictures although it probably looks by now like every other little town I’ve visited in the last twelve days. It’s a bit of a shame, because it does have its own little flair…but I guess I’m a little burned out on picturesque towns. I didn’t even want chocolate or ice cream. Shoot, I even paid the 3 Euro for the tram on the way back. And I didn’t even buy a magnet. 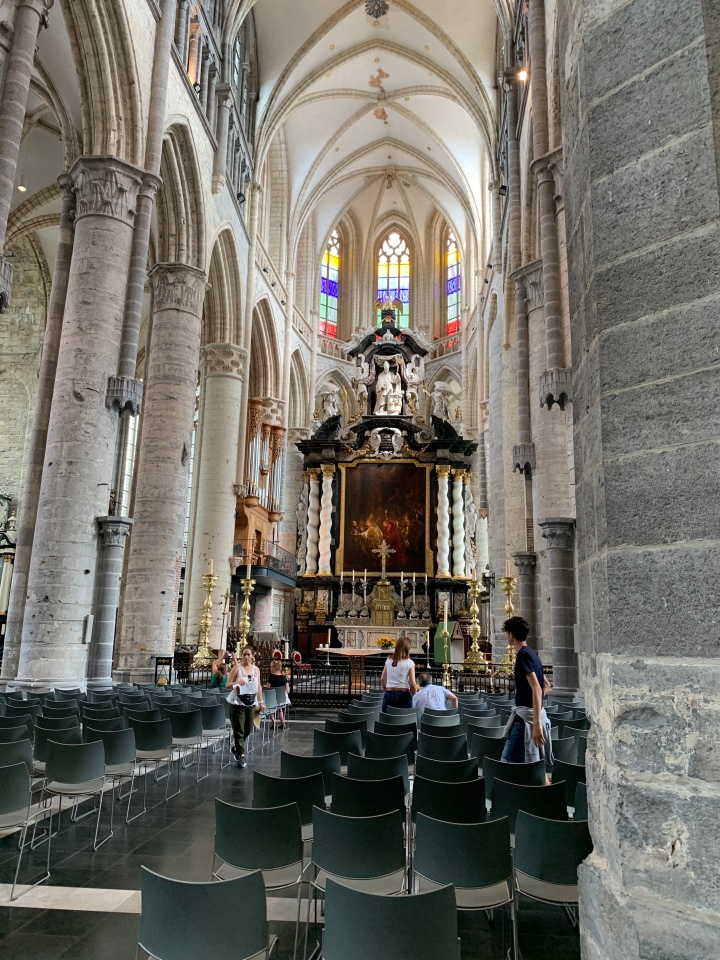 It must be time to come home.

I’ve loved my tour of Europe. In twelve days, I went to 10 countries and walked over 100 miles…just me and my black back pack…Full of magnets.

I visited Ireland (Galway, Cliffs of Moher, Bunratty); Cologne, Germany (if it counts); Italy (Venice, Cortina and the Dolomites); Budapest, Hungary; Vienna, Salzburg, and Schönbrunn in Austria; Barcelona; Ghent, Bruges, Brussels, and Dinant in Belgium; Luxembourg; Amsterdam and Harlem, Netherlands; and Dunkirk, France. [I had previously visited four of these countries and at least four others in Europe (England, Scotland, Czech Republic, Switzerland). I had planned to also go to Slovakia, but we’ll have to save that for another trip].

I feel like I’ve only scratched the surface of the scenes of Europe, but at the same time, I don’t think I could have crammed much more into two weeks. And when it was all said and done, I lived out of that back pack for 17 days. That’s long enough.

It was a trip I hope to always remember. It was a return home that I hope to forget. I may or may not blog about my return trip, but regardless, let me make it clear once and for all: I do not like JFK airport. Sitting in it for hours on end is awful. Sleeping on the floor there is pitiful. Getting help there is impossible.

So…while New York is not at all a pleasant welcome, it is sure good to be home.

Thanks for taking this trip with me and if you feel even a little bit jealous that you didn’t get to go, picture yourself on the 17th day living from a backpack sleeping on the floor of the airport. Then be glad you’re home.

One thought on “Day 12 the Stillness of Dunkirk”