This week marks 15 years since I packed my two suitcases and boarded a mid-sized plane to begin my new life in Charleston, South Carolina.

A few months before, I had never even heard of Charleston and probably couldn’t have told you if it was on the beach or in the mountains. But I was fresh out of law school and willing to go wherever I could get a job. Which meant, frankly, pickins were slim.

When I had arrived in Charleston, a few weeks before for an interview at the Bostic Law Firm, initially, everything seemed to go wrong. US Airways had lost my bag.  I got a migraine. I was staying with people I hardly knew and (due to the migraine) could hardly hold an intelligent conversation with. My potential employer was stuck in KY due to weather so, to buy time, I ended up having an intimidating interviewed by every one of the firms’ four attorneys and the paralegal. When I did get a chance to speak with Mr Bostic, we took a hard look at the licensing differences between California (my home state) and South Carolina and we concluded I was pretty much a fish out of water. I felt very much like the young, ignorant law student that I was. I wasn’t really ready to be a lawyer.

So when Mr Bostic offered me a job making $38,000/yr, I felt like I had won the lottery; not because of the money but because of the enormous odds that we’re not at all in my favor. As I contemplated the opportunity over the course of the next day, I felt sure it was the next right thing.

I arrived in Charleston the second time on a rainy Tuesday. Actually, it rained every day the first month. But I hardly noticed. I was so busy trying to make heads and tails of my new job that the weather outside was pretty much irrelevant.

But Mr Bostic—eventually “Curtis” to me—wanted me to install a server, a new printer network, and new legal software. And I didn’t have a clue. He would eventually figure that out.

So that was the beginning. Curtis took a chance on a green-as-grass girl from another state whose main job experience to that point included teaching piano, filing papers, making phone calls, applying stickers to first grade math papers, and checking head after head for lice. About the only skill from my prior life that came in handy was the ability to send an email.

Despite all my ignorance, Curtis treated me as an equal with the other attorneys at the firm. He spoke highly of me to others. He affirmed my work. He often stopped to explain things to me that I probably should have already known; but didn’t. And he chose to forgive my many, many mistakes. Sometimes, he even owned them to other people instead of pointing out that it was me that made an oversight.

I immediately found a lot of fulfillment in my job. I liked learning new things and I also found that we did a lot of work for churches and nonprofits—helping them get started or untangle serious issues. He had a lot of business sense and an authoritative manner that often passed on confidence that helped clients head in the right direction. I could tell he had a lot of people’s respect from various segments of the community. We were never hurting for clients.

Not all those early days were easy.  Most were long and many were pressure-filled and almost all of them stretched me in some way.  I specifically remember one particular time when I was feeling frustrated trying to sort out a legal research project and I landed on an article that encouraged attorneys and law students to own their work and to strive for excellence.  I remember getting an attitude adjustment from its pointed admonition: Figure it out.  You are not a potted planted.

That little article has stuck in my head all this time and the admonition has come back to rebuke me from time to time.

Over the last fifteen years, As Curtis has traveled all over the world, I’ve booked a ton of flights and spent hours of my life on the phone haggling with Delta airlines over last minute changes. I’ve helped prepare countless powerpoints…searching for the right pictures and the right quotes and sometimes trying to think of the right illustration. I helped him run for Congress, transition to general manager of the Kinzer Companies, and start non profits. I’ve helped buy and sell properties, airplanes, cars, and kangaroos.

But what most people don’t know is the extent Curtis has gone to to support me. He and Mr Jay painted my first house. He paid to fix up the first car I bought in Charleston—which had been in a strange sort of wreck that left it scraped and dented on both sides. (And he hasn’t given me grief despite the fact that I think I’ve scraped every truck he’s owned.). He and Jenny let me be a part of many travels and I have happy memories with the Bostic’s all over the world.

But I think far more than his generosity to me, I’ve been motivated by the opportunity and the words of affirmation. He chose to include me in some larger cases, deals, and projects that a new associate would not typically get to work on. He didn’t have to do that; especially early on when I had little or nothing to contribute.

Curtis encouraged me to grow and learn professionally, but even beyond that, he helped me grow as a person. He knows I love to work with kids and when I suggested doing respite foster care, his reply was, “I think that’s a great idea!”

And when foster care ended up being a lot more of a time and energy commitment than I anticipated, he tried not to complain about the significant distraction and many afternoons of missed work. I mean, he really, really tried.

A couple years ago, when Curtis was given an office inside The headquarters at the Kinzer Companies, where we frequently travel, one of the Kinzer employees showed up with a plaque of Curtis’ name to put in the slider on the door.

No one had thought to get me one. There was only one slider on the door. And, frankly, my feelings weren’t the least bit hurt. I wasn’t the manager.

It’s funny, if my name had never been mounted, it wouldn’t have bothered me in the least. But the fact that he stopped everything and wanted me to feel like an equal and have some ownership of the office still means a lot to me.

Other things have changed over the years. I don’t spend as many hours on the phone with Delta airlines as I used to. We haven’t sat in court together for a long time.

But one thing that hasn’t changed is that I’m very grateful. I sent 50 resumes before I talked with Curtis and had had only one interview.

When I was drafting this blog, I remembered and re-read this post which I wrote five years ago. It essentially said that dreams don’t always come true, and that’s a good thing. The undertones were that my life hadn’t exactly gone as I planned. My intentions of working 3-5 years had turned into 10. And I was learning to trust God’s hand and believe that His story of my life would be a good one.

Five years later, I’d like to add the follow up story and just be clear: I don’t feel like my life is a consolation prize. God doesn’t give out consolation prizes. He gives good gifts (James 1:17). At 38, I am more confident than ever that God loves and cares for me. I am more amazed at the little ways he works and the small prayers He answers for His glory.

I am more grateful for the people he’s put in my life—my parents, my siblings, my friends, my church, and definitely Curtis and Jenny. He could not have picked a better couple to help me grow those first years in the working world.

I guess I’ll never know what my life would have been like had I not moved to Charleston. But I’m glad I did. I learned I wasn’t a potted plant (And a few other things besides). A job at the Bostic Law Group was the perfect gift.

And I’m grateful. Thank you, Jesus. And thank you, Curtis. 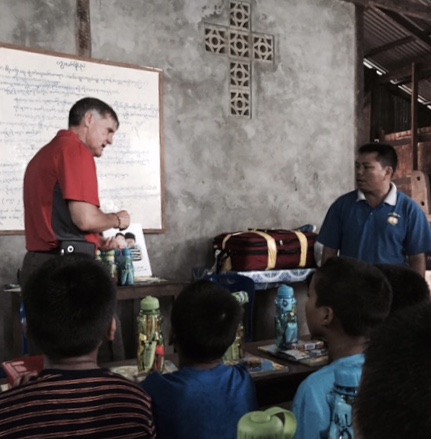 4 thoughts on “The Perfect Gift”