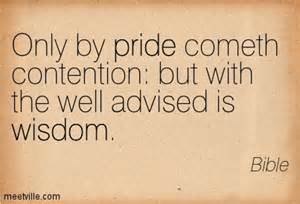 I read his e-mail; and I was ticked.

First of all, he was wrong. What he was telling me was bogus and I knew it.

But it wasn’t so much what he said as how he said it that had me irritated. He had baited me for a fight and I was inches away from taking his bait.

I went back and re-read my prior e-mail to him. Looking at it subjectively, I had to admit that even though I hadn’t meant for it to sound ugly, someone who didn’t know that or know me might have understood it as ugly. So he had responded by taking things down a notch. And now, here I was, tempted to take us lower still.

There is a word for it. A five letter word that starts with a “P.” Proverbs tells us that only by pride comes contention. And in the legal world and in the real estate world, there is ton of it—both pride and contention—that is.

And sometimes, I get sucked right in. Like right now, when a realtor is trying giving me a legal lecture. I don’t need a realtor to tell me what the law is. That’s what I went to school for. What did he go to school for? Interior design? Auto repair? Landscaping? Tell me about those things.

When we are called on to “zealously” represent a client and to negotiate with other professionals, it is so easy to get caught in a battle where words become barbs and barbs become hooks that we use to drag others down.

I couldn’t count the number of days that have been ruined by a nasty exchange with another professional as we both try to do our jobs. I’ve been yelled at, I’ve been chewed up, I’ve been lectured, I’ve been educated, I’ve been blamed, I’ve been accused, and I’ve been just generally provoked.

And sometimes, I’ve fallen right in the trap. (I never create the trap, of course. Just fall in. Like the innocent victim of…well…of pride.)

Our egos, or rather, our pride doesn’t want the other side to get the final say. We want to win. Unfortunately, there is nothing to be won usually; just something to be lost—a relationship, a reputation, a testimony.

I have often regretted my words: what I said, and even more often, how I said them. In fact, the longer I work, the more I recognize the wisdom of kind words.

Mother Teresa is often quoted as instructing us to “speak kind words and receive kind echoes.” And she is right. If you live in a hollow tube. Personally, I would say that speaking kind words does not guarantee a kind response, although it greatly increases the chances.

Unfortunately, the chances are still good that sometimes, kind words will be greeted with an unkind response. Sometimes, my best effort at peacemaking will be misunderstood or just plain rejected.

So regardless of what I do and say, I will probably never win a popularity contest.

But I’m not trying to win a popularity contest.

I’m trying to please an Audience of One. I need to make sure the words of my mouth and the meditation of my heart will be acceptable in His sight.

And that is why it requires humility. Because Mother Teresa is only partly right. Kind words won’t always get you what you want. Not even echoes of what you want. There is no selfish reason to be nice all the time.

So this is me reminding myself to choose kind words—not for the kind echoes—but for the One Listener who is more concerned that I learn Christ-like humility than whether I have a cute post, a funny tweet, or a winning argument. Then, no matter what, the echoes of my words will be true and right…and they will probably be kind.