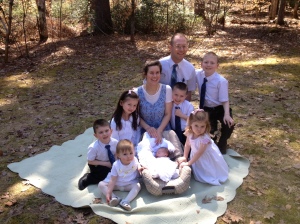 She had a temper growing up.  Of course, so did I.

The difference is, people who knew us then will believe it about me.  My sister was like a living Elsie Dinsmore—sweet, sensitive, and obedient.

I was more outspoken and more type-A, so I was often the ring leader even though she was two years older.  I was also a merciless competitor.  We ended up in the same grade homeschooling, and in my immaturity, I made it a point to finish first and be the best at everything.  The only game I couldn’t beat her at was Monopoly.  She could pinch a penny.

For a while, we shared a room.  Mom used to say of us that we were “enemies all day and friends all night.”  I don’t remember what we stayed up late chatting about, but I do remember some of our fights.  I thought she was messy; she kept entirely too much junk.  I also rebelled when she came up the idea of washing our clothes in the bathtub instead of sending them downstairs to the laundry.  Allyson was more than a tad obsessed with anything old fashioned, and the idea of washing clothes by hand appealed to the pioneer homemaker in her.   I was a lot happier limiting old fashioned ways to my imagination.

Allyson was blessed with a very keen sensitivity toward sin.  What was right was right and what was wrong was wrong.  If something was right, you did it.  And if it was wrong you didn’t.  For several years, she determined to carry her Bible with her everywhere she went.  And when she was twelve or so, she decided to wear only skirts or dresses; a resolve she has kept to this day.

Despite our differences, we called ourselves best friends.  Looking back, that was her idea, and she was a loyal best friend.  I kind of drifted a bit, especially when people started of thinking of her as “different”—carrying around her Bible and wearing skirts all of the time.

She was one of the most disciplined teenagers I’ve known.  She would get up at 5:00 am to do aerobics (to classical music).  By then, I shared a room with Erin, but Allyson would knock on our door every morning and ask if I wanted to do them with her.I would say: No.

After she graduated from high school, Mom and Dad let Allyson take over all the food preparation and grocery shopping.  I’m not sure that did a lot to generate peace in our home because Allyson’s primary goal was to save money and the rest of us didn’t have a lot of appreciation for that goal.  To put it mildly. Some of her “empty out the refrigerator” recipes were met with lower approval ratings than US Congress.

We weren’t particularly close anymore by this time; I was into all of the things I was into—debate, tutoring, Awana, computers, and whatever else that packed life full.  There was a lot I could have done to show gratefulness to her for the things she did for our family, but I didn’t bother.

Nevertheless, Allyson was a persistent homemaker.  She wasn’t intent on going to college; school wasn’t her love or her strength necessarily.  However, it still bothered her when people asked her the usual, “what are you going to do next?” questions in a way that sort of hinted that college was a prerequisite for heaven. I don’t think anyone meant to be harsh; they just took it for granted that the transition into adulthood should look a certain way.

But she was just gifted in other ways.  She sang beautifully and she took up painting china.  Allyson had—and still has—a tender heart that is often conscious of needs the rest of the world overlooks. Allyson looks out for the “uncool” people. She meets needs that are truly needs.

In the next few years, Allyson went through a difficult heartbreak.  Some would think that would be the time that having sisters would come in quite handy.  But I’m not sure we were any help.  It wasn’t that I didn’t care—I just didn’t know what to say or do besides give her space.

So she really surprised me when she gave me two hand painted china plates.  They had birds on the fron

t, and on the back of each, she had written scripture in her elegant script—“Behold the fowls of the air…” She must have spent many, many hours tediously painting those beautiful plates. At the bottom of one she had written, To my amazing sister, Danielle.

When the opportunity came for my family to move from California to New Hampshire, Allyson was the only dissenting vote.  But we went anyway.

And the day we moved in, we met Kevin.  Kevin met Allyson.  And as his grandmother said, “I’ve never seen a young man more in love.”

Shortly after their wedding, Allyson was expecting.  And she just glowed.  She is a beautiful girl anyway– but she was even more beautiful pregnant.  And we were all very, very happy for her.  She was a wonderful wife and I was sure she would be an equally good mother. Her child would be the first grandchild on both sides as well as the first great-grandchild for the two set of great-grandparents that lived locally.  Yeah, a little bit of pressure there.

A few months before the baby was due, she went in for a check-up and the doctors became concerned that the baby wasn’t responding to pokes and prods. I was at work when I heard there was a good chance she lost it, and I cried so hard I got in a wreck on my way home. But the doctors were wrong, and this little baby was born healthy as can be—even if he came a few weeks late.

It has been a steady stream of beautiful little lives since then: seven in the past ten years. And Allyson has handled it expertly. The nine of them live in a 1500 square foot house and she keeps it clean, orderly, and entirely devoid of junk. She still cooks food from scratch and washes her dishes by hand although I imagine she has said thanks more than once for their clothes washing machine. They have no TV, and she home schools the older three kids. Somehow.

By contrast, I feel like I’m doing good when I can see the corner of my desk. And people have started asking me what I’m going to do when I grow up.

But what is most amazing is not what Allyson does, but how she does it. She has the beauty that comes from a quiet contentment; an authoritative grace; a contagious peace.  And I can lay claim to being a part of the test panel for her rise to low-budget cooking genius.

I think college has its place in this world, but it isn’t for everyone and it probably would have had nothing but debt to offer someone like Allyson. If homemaking is an art, she has mastered it. And she did it by faithfully applying the lessons God teaches best in His way and in His time.

With the score 7 to 0, I think it’s safe to assume that I’ll never catch up. Thank goodness, it isn’t a competition anymore. Just two sisters who love each other even though they live a thousand miles a part. It’s hard to believe that we ever shared school books, a bedroom, and shoes.

3 thoughts on “A Tale of Two Sisters”