They met at a honky tonk. He was fifteen. She was fourteen. And he married her only one year later.

Most stories that begin that way don’t end well.

And for a while, it didn’t look like this one would be any different. He had a drinking problem that landed him in jail repeatedly.

The couple had no money and the young wife found it increasingly difficult to bail her wayward husband out of jail. The only way she knew to get money was to ask her husband’s dad for a loan.

But even his own father was losing hope that his son would amount to anything and one day he told Lucy that was it. It was the last time. He would never again pay to bail his son out of jail. Don’t even ask.

Unfortunately, it wasn’t long before Willard was out working on a water well drilling site (where he would be for weeks at a time) and he got to drinking…and fighting…and once again landed himself in jail.

Lucy had no money. She had no way of making any. She didn’t even know anyone who could lend her any. Except one person: her father-in-law. And he had told her never to come back.

With fear and trepidation, she approached her father-in-law again. And he was furious. When he found the words, he told her, “Lucy, I told you I wouldn’t give you any more money to bail Willard out of jail. And I won’t.”

But he wasn’t quite finished. He said, “But…you deserve better than this. I’m going to give you some money, but not to bail him out. It is your money. You can do whatever you want with it. You can take it and go back to your family if you want. It’s your money and your choice.”

Lucy took the money.   And immediately went to the courthouse and bailed Willard out. Even though she didn’t know then that it was going to be the last time.

But while drying out in a jail cell away from home, Willard had realized his need for a Savior. He trusted Christ to change his heart and his life. He purposed never to touch another drop of alcohol. And he never did.

That didn’t necessarily mean that life was easy from that point on. Two uneducated teenagers living in the hills of Kentucky. Three of their five sons died in infancy.   And there would be plenty of other bumps and bruises, ups and downs. But they faced life together—both bright, hardworking, and willing to take risks—qualities that paid off at first in small ways as their entrepreneurial spirit provided jobs for many well-deserving Kentuckians…and even a few undeserving ones.

And that was only the beginning.

In fact, another thing Lucy never could have foreseen the day she scraped and begged enough money to bail her delinquent, teenage husband out of jail—was that he would one day be one of the richest men in Eastern Kentucky. Fortunately, not only one of the richest, but also one of the kindest, most generous, and most unpretentious.

In fact, I had the privilege of being there on their sixty fifth anniversary. They celebrated by eating bologna sandwiches with some friends in the lunch room of their drilling company. He wore his usual khakis and a collared shirt; she wore jeans and her signature long, blond ponytail—I never saw her without it.

And I’ve seen them give millions of dollars to schools, colleges, performing arts centers, and one of her favorite causes, Hope in the Mountains—a home for young women overcoming addictions.

That’s not to say they gave it all away. They spent some of their earnings on themselves and their hobbies. Any they had the right to. They earned it. It was theirs to invest as they chose. Fast cars, fast jets, or bologna sandwiches.

As the years ticked by, she began to have some aches and pains that slowed her down more and more. It was hard—even with her chipper disposition—for her not to show pain. But when someone would comment on how beautiful she looked, she’d give a mischievous grin and say, “Well, I can’t help that!”

I was also privileged to know them when they celebrated their seventieth anniversary. Yep, seventy years together. They celebrated by going to church and then to a local restaurant with their children, grandchildren, and great grandchildren. Because they were rich in ways other than money.

This week, Mrs. Lucy Kinzer was laid to rest and Willard planned her service. The church was packed for the celebration of the life of this remarkable woman. At the end, a soloist sang, “You are so Beautiful.” The music box Willard had bought her for her last birthday—only a few weeks ago—plays that song. “You are so beautiful to me…”

As the last notes faded, Willard kissed her gently on the forehead for the last time. “The last ten years of our marriage were the best!” He had told us. And in that moment, I believed it. If you had been there, you would too.

It was seventy one years since he had first seen her dancing in a honky tonk. And the last decade had been the best. Because God redeems and rewards some of the least expectant lives.

So that’s their story.

But “You Are So Beautiful” was a fitting summary of the life of a young mountain bride sporting a blonde ponytail and an unquenchable loyalty—and a fitting climax to one of the greatest love stories I’ve ever heard.

After seventy one years, he still thought she was beautiful. But even as I type those words, I can see that sly grin and hear her fun retort, “Well, I can’t help that!” 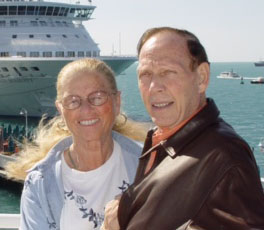 10 thoughts on “You Are So Beautiful”