Tuesday morning came a little too soon after 24 long hours of travel. But I was pleased to find at breakfast that Israeli food was not as bad as I feared. They even had chocolate bread. I’m pretty sure that was Jesus’ favorite breakfast food too.

Our guide showed up around 9:00 and we headed to our first stop in Cesarea–the port town on the Mediterranean–first built by Herod, but conquered and rebuilt many times in the centuries following.

We quickly caught on that one of the hardest things about touring Israel is trying to keep your chronology straight. Biblical history covers thousands of years, but then we’ve also had thousands of years since…can make for some mental gymnastics trying to keep your centuries in order.  There is just no logical way to do the tour chronologically, so I’ll just try to take it as it comes. But I just have to say, it’s complicated.

I can also understand better why there is so much conflict over land. It has belonged to everyone at some point. In Cesarea, for example, The same turf was occupied by Canannites, then Israelites, then Romans, then Israelites, then Muslims, then crusaders (Catholics)…then…I lost track. Each built a city on top of the last which is why they have to dig so far to get to the Biblical sites.

Our guide is not a Christian, but he specializes in Christian history and tours so he knows a lot about the Bible. A lot. And clearly, he is accustomed to knowing more about it than the average Christian tourist. Kinda shameful.

While we were in Cesarea, he read to us the story of Peter and Cornelius — where God instructed Peter to take the gospel to the Gentiles.  It took on new meaning looking across the port town, theatres, shops, and all the culture that came with the gods of that era.

After Cesarea, we headed to Meggido.  This is a city on a hill that was originally built by Canannites. It was later taken by Joshua and the Israelites. During the days of the kings, it was developed–probably by Solomon.  There are only ruins no higher than your knees, but it includes the remnants of stables, temples, and the fascinating city gates–the hub of the city.  Over the years, it’s estimated the town has been rebuilt more than thirty times.

The most remarkable part of the city was the water supply. The town at the top of the mountain was fed by the spring at the bottom. For security reasons, the citizens couldn’t let the water supply be outside the city walls, so their means of diverting and accessing the water supply was absolutely astounding.  Somehow, they hand dug 187 steps down into the lime stone and got the spring to run into the town. It was quite a feat and made me appreciate what the chore of getting the water would have been like for the average girl. The local Planet Fitness.

This place is not just known for its past–it overlooks the plains of Armeggedon–where we believe the final battles in world history will take place. I don’t plan to be there, but if you think you might be, stay in shape. 187 steps is a long way to carry up your water.

As we passed Mt Carmel, Gilad had us read the story of Elijah–and another one I’ll probably me 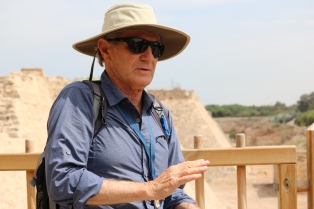 ntion later. Pretty cool to put places with stories. And pretty strange to learn so much about the Bible from a man who doesn’t really believe it. It comes alive a lot more here and you realize how rich the Bible is as a history book even to those who don’t see it as anything else.

Our final stop of the day was in Akko–another city with a long and sordid past but mostly revolving around the Middle Ages and crusaders. The fortress built by the Hospitalar Knights is incredible as are the tunnels under the city. Put perhaps the best part was walking through a town dating so far back, yet still growing and active (though Arab, not Jewish). It was full of cats, markets, and plenty of dirt and junk; but also screaming of history and surrounded by breath taking views of the Mediterranean.  Words don’t quite do it justice. It was quite a place.

Tired feet took us back to the van. The seven hour time difference was getting the best of me and everyone else (except Stephen). It was fitting that the Jewish days end at dusk because I could tell mine was fading with the sun too.

All in all, it was a great day, and I’m looking forward to learning more about this complicated place with so many stories to tell. 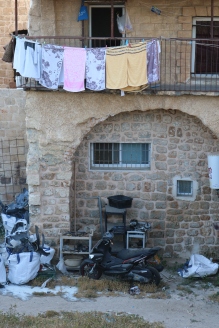 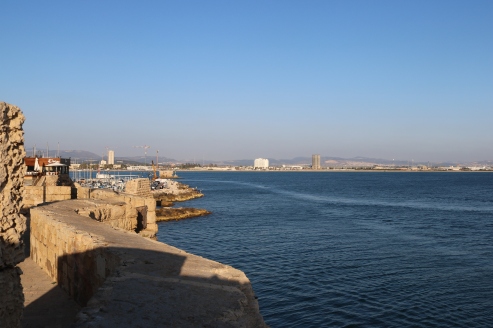