View of the grave sites on the Mt of Olives

Another view from the Mt of Olives 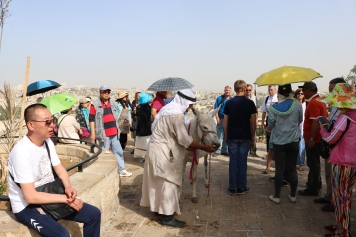 Our last day started at the top of the Mount of Olives…where Jesus spent a good bit of time and, in fact, wept over the city of Jerusalem.  It was also where Jesus and his disciples went after the last supper.  The mountain got it’s name from the many olive groves–including the Garden of Gethsemane (at least, as we know it). The mountain was used as a burial site and has about 150,000 graves…including (by tradition) the graves of some of the prophets.

From there we walked to the Garden of Gethsemane.  There were quite a few people there which didn’t give much opportunity to appreciate  what it would have been like the last night before the cross as the Lord prayed in agony.  I wished the trees could talk–some of the trees still thriving there may date back to the time of Christ. 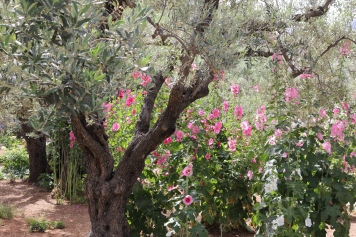 Jesus was arrested and taken down into the city–a steep walk even now.  There are lots more sites and cathedrals along the way, but we were more excited about sticking to the actual story than taking in the tradition, relics, and various churches–all wanting their piece of the holy land–along the way.

The first trial would have taken place either at/near the temple or the house of Caiaphas–somewhere with a courtyard.  Jesus had broken the Sabbath in their minds on many occasions, but that was not a capital offense, so the Pharisees needed something else.  Thus, Jesus was charged with the capital crime of destroying the temple.  But when they could not find the required two witnesses to corroborate any of the accusations, they got him on another charge–blasphemy.  He claimed to be the Son of God by His own admission.

Actually being there–even in a rebuilt city–gave us some appreciation for the various places Christ would have been taken that night.  The determined religious leaders covered quite a bit of ground, taking him from the Mount of Olives to Caiphus, to Pilate, to Herod, to Pilate, then the place of the execution.  Most of the way is now in the Muslim quarter of Old Jerusalem although the alleged “Via Dolorosa” winds through a good part of the city…mostly 30 feet or so above where Jesus would have actually carried the cross.

The temple itself, of course, is now a Muslim holy site.  One of the nearby shopkeepers, however, in exchange for our willingness to browse in this shop, gave us access to the rooftop of a Muslim school with incredible views into the Temple Mount.

The people who had seen Jesus in Bethesda–just steps away from there–heal a paralytic, and so many other signs and wonders now yelled, “Crucify him,” “We want Barabbas!” and even, “We have no king by Ceaser!”  Even Pilate could tell that He had been delivered up because of envy, but he feared a riot…so he let the people have their way.

At some point, Jesus was taken to the governor’s headquarters, stripped and scourged.  And from there, he was taken to Golgotha–or the place of a skull.

There are two prevailing views on where Golgotha or Calvary is and the fact is, no one knows for sure.  But we went to the place called the “Garden Tomb” which helped us catch a glimpse of what that last night might have been like. 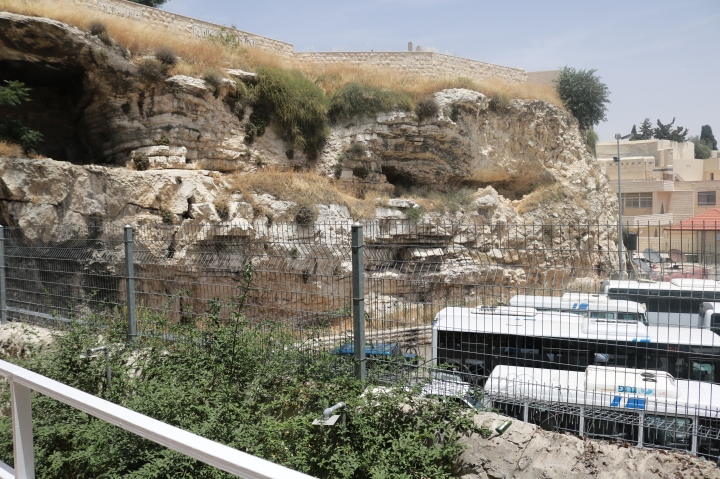 You can’t see it well from this picture, but there is a definite skull like rock formation in this cliff…and it otherwise fits the biblical description of the crucifixion well, being just outside the city walls (at that time) and in a traffic thoroughfare where they held frequent executions.  It may have actually been on the parking lot or the cliff above…again…we don’t know.  But either would stand in stark contrast to the fanfare of the Church of the Holy Sepulcher–which is partially owned by six different spatting denominations.

From there, the body may have been laid in the garden tomb, hewn out of the hillside nearby.  Again, we don’t know, but at the end of the day, it doesn’t really matter.  Why would we look for the living among the dead?  His bones aren’t there…or anywhere. 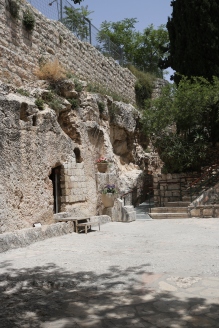 He is not here…He is Risen!

Come, see the place where the Lord lay…

The past, present, and future of Jerusalem is a story unrivaled by any other place.  As we walked the streets, the words of the song, The Holy City rang in my head.  One day, Jesus will return in like manner as He left.  May He find us celebrating the fact that He came, lived, died, and ultimately won victory won over sin and death.

Jerusalem! Jerusalem!
Lift up your gates and sing!
Hosanna in the highest!
Hosanna to your king!