Up until now, the group tours I have taken have had max a dozen people. Today, we were 50 people strong all on one big bus. The common tie between all of us: English.

That definitely doesn’t mean American. In fact, I’ve been surprised at how few Americans I’ve met on this trip. Far more have been Canadian, Australian, from the UK, or even India. Many times, I’ve looked at someone and thought they were from the US until they opened their mouths.

Anyway, our perky Spanish guide held a large purple sign over her head and hearded us toward the bus. There were a half dozen other tours leaving from the same time and place so it was a bit of a zoo. Thank goodness for her purple paper taped on a wood stick which she held triumphantly above the crowd.

It is a long ride to Luxembourg. But Marium taught us a lot about both Belgium and Luxembourg on the way. Belgium is a country of about 11 million (roughly the population of Georgia); Luxembourg has about 600,000 residents. Both are effectively governed by Parliament although Belgium has a king and Luxembourg has a duke.

Luxembourg, the city, is as old as the ninth century—having originally been settled by the Vikings. Luxembourg, the country, only dates to the nineteenth century. The name Luxembourg means “little fortress” and the city was apparently a very good one. When we got there, we saw some of the old city walls and it was easy to see why the location above the river was formidable.

The main industry in Luxembourg is banking and finance and it is a wealthy country considering its size. Minimum wage is roughly ~$13,50/hr and they have more Porsches per capita than anywhere in the world.

I didn’t really feel like paying 25 Euro for lunch, so another girl and I walked around a bit and then got a wrap at a small corner cafe. I haven’t said this (or thought it) about any food I’ve had so far this trip, but there is only one word to describe it: disgusting. (Mostly mayonnaise with wisps of lettuce, tomato, and prosciutto). I noticed my friend threw hers in the trash can too as we walked as well.

The guide showed us Parliament and the Duke’s residence. There were a number of churches, squares, an outdoor farmer’s market, and all the typical retail offerings of a small, high end town. She also talked a good about the EU, which had its beginnings here and cracked me up with some of her English phrases such as her frequent references to “sky scrappers.”

Leann and I walked across the bridge to the new part of town and back…There is a pedestrian/bike bridge suspended below the car bridge which made for a nice shady place to walk and take some pictures.

By the time we were back, we pretty well felt like we’d seen Luxembourg. There were some nice parks, and overall, I got the feeling that it would be a pretty nice place to live if you’re in the banking and finance world and you really like mayonnaise.

On our return trip, we stopped in Dinant, a very picturesque Belgian village where the inventor of the saxophone is from. We then wound our way up the river; it was a very beautiful drive. The area had had a coal boom in the 60s and 70s but has since lost most of its industry and is now mostly summer homes and strawberry growers. 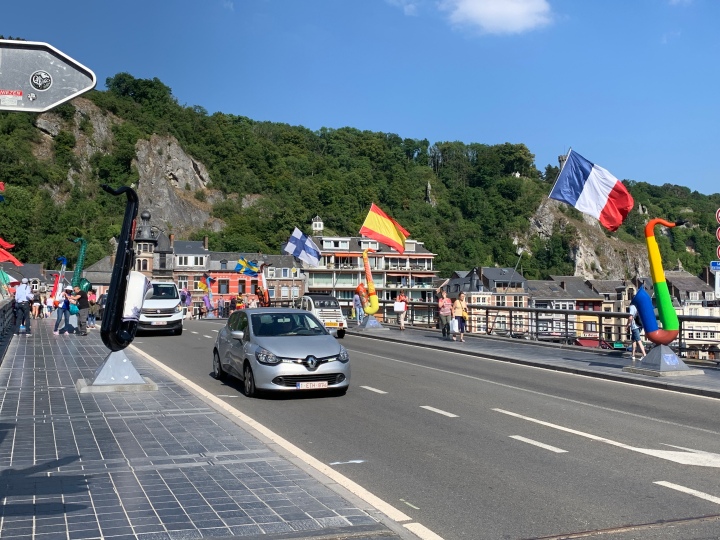 I felt a little yuk by the time we got back. I wasn’t sure it is was from the long ride or the mayonnaise lunch that I had tried to chase away with gummy bears.

Overall, it had been a good day, but I felt the boxes had sufficiently been checked and I likely won’t be returning to Luxembourg.